Ceramic Cores
Cored airfoil parts are among the most complex castings in the world and therefore are among the most difficult to inspect, one aspect of the complexity is the largely unknown geometry of the actual ceramic core; until now. Level 3 Inspection can use White Light Scanning (WLS) with computer-aided-inspection (CAI) to compare the ceramic core to the CAD model, other cores and the core die. This technology gives our customers a new and profound insight into the size shape and geometric conformance of cores that they have never had before. By inspecting and perfecting the ceramic core (and die) Level 3 can help their customers significantly reduce wall thickness and other issues commonly associated with cored castings. 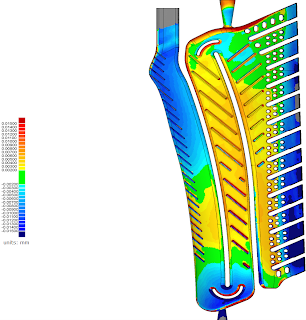 Level 3 Inspection’s SmartCompare process gives their customers the ability to identify problems with a particular area of the part and focus efforts to improve problem areas without spending time and resources on areas that are known to be conforming. This is especially helpful when dealing with injection molded components, such as ceramic cores. The ability to quickly compare the product of the mold to the nominal CAD model as well as the ability to compare the products of multiple molds gives Level 3 Inspection’s customers an advantage in regard to quality and time to market.
The Level 3 approach replaces traditional plate inspection or a CMM system with WLS, which can capture and calculate precise 3D, coordinates for millions of points in minutes.
CMM captures only a few points in the time that WLS can capture hundreds of thousands, so Level 3 is able to do a more thorough inspection. The results are much more visual and therefore much more easily understood and interpreted.
Inspecting injection molded products with complex free form geometry poses some unique challenges, such as analyzing the complex surface areas of a newly manufactured part compared to the CAD model. This is difficult using a CMM system, which depends on the operator to accurately capture the points that will show whether or not the part is conforming within the allowable tolerance. Often, there is not enough point data to make an accurate comparison.

The new capabilities provided by computer-aided inspection have not come a moment too soon for the competitive injection molding and ceramic core market. Increasingly, companies are facing the demand for more quality inspection results in less time.

Level 3 Inspection’s customers are moving quickly to statistically based inspections in which the qualification is based not on a single piece, but on a sampling of parts, new part inspection would take much longer to complete without the ability to automate portions of the process.
Traditionally, studies based on a sampling of parts are done using CMM to generate metrics on dimensions for each part. This is a time-consuming process, since each part must be measured individually. Data is then typically transferred to an analytic program, evaluated, then published.
Level 3 is replacing the CMM-based process with automated trend analysis. Once a part is scanned and a report is saved, Level 3 can automatically generate portions of the capability studies defined by their customer or OEM specifications. Batch processing enables Level 3 to collect data and generate reports on a large number of parts. Statistical analysis tools allow Level 3 to compare parts for pre-defined factors such as repeatability, changes over time, and variations from part to part.
Speed is the key. Speed of inspection is always Level 3 Inspection’s main challenge. Everyone wants the results yesterday and our process is helping us deliver more complete results much quicker.
Contact us today to start getting superior inspection results in shorter time with easier understanding leading to higher confidence
Units: inches

Computer-Aided Inspection (CAI):
Six Sigma is a highly disciplined process that focuses on developing and delivering near-perfect products and services. Sigma is a statistical term that measures how far a given process deviates from perfection. The central idea behind Six Sigma is that if you can measure how many defects you have in a process, you can systematically figure out how to eliminate them and get as close to zero defects as possible. Manufacturing companies around the world are implementing the Six Sigma process to:
·         Improve customer satisfaction
·         Maximize process efficiencies
·         Increase competitive advantage and market share
·         Save millions of dollars in operating expenses
Jack Welch, former CEO of GE, says that Six Sigma is “the most important initiative GE has ever taken…it is part of the genetic code of our future leadership.”
Many companies implementing Six Sigma use a process called DMAIC (define, measure, analyze, improve and control) for continued improvement. DMAIC is a systematic, scientific and fact-based process that eliminates unproductive steps. It helps companies fulfill the vision of Six Sigma.
New computer-aided inspection (CAI) technologies can drastically improve the “measure” and “analyze” part of the DMAIC process, making them valuable tools in the Six Sigma approach to quality.

It is well documented that three-dimensional verification is frequently the slowest, most expensive and disruptive element of the manufacturing process. Advances in CAD/CAM/CAE and digital technologies continue to improve other manufacturing processes, but the dimensional inspection bottleneck has remained intact.
Manufacturing companies spend a significant percentage of their resources to develop 3D CAD models that define the design of a part. But, the efficiencies of the 3D CAD model do not carry over into the verification and inspection processes.
Designers break the 3D models into 2D drawings and apply constraints to determine product configuration. Geometric design and tolerance (GD&T) assigned in 2D drawings are then evaluated in the 3D models, yielding a complex web of dependencies. Changing and maintaining the 2D drawings requires considerable effort, and the process contains a great deal of duplication.
Today’s Inspection Process
Most inspection today is done by contact metrology, the science of physically determining an object’s dimensions. Contact metrology includes everything from simple manual tools to coordinate measurement machines (CMM).
A CMM system consists of a platform on which the desired measurement object is fixed. The station has an arm where a touch probe is attached. The machine makes direct contact with the object being measured at a rate of approximately one contact measure per second. CMM systems vary in size depending on the objects they need to measure. They are slow, large, expensive and susceptible to environmental temperature variation.
The CAI Alternative
CAI aims to remove the bottleneck of dimensioning verification in the manufacturing process. It is not intended to replace metrology, but rather to introduce a faster and easier process for directly comparing as-built parts with their 3D CAD definition.
There are two widely used non-contact measurement systems for CAI: 3D scanners and laser trackers. 3D scanners are commonly used for range finding. They work by projecting a laser beam onto an object and measuring its reflected image with a positioning sensor. 3D scanners are fast and can be mounted onto an existing CMM.
White Light Scanning is also known as interferometry. By knowing the wavelength of the emitted light and the distance between fringes, the distance between two points can be computed.
Non-contact white light measurement systems collect data much faster than CMMs. It is common to collect tens of thousands of points per second. With massive amounts of data being transmitted to a computer for processing, software based on complex mathematics and sophisticated algorithms must be used to interpolate the data quickly.
The CAI Wish List
The new wave of CAI systems combine fast, non-contact measurement machines with software that aligns, compares, evaluates and reports the deviation between as-built parts and the 3D CAD reference model. Market research has determined that customers want the following attributes in a CAI solution:
·         Accuracy of 0.001mm to 0.005mm
·         Speed of more than 10,000 points per second
·         Portability for in-process measurement
·         An open system for rapid conversion to standard or native CAD formats
·         Automatic align, compare, evaluate and report process
·         Repeatable setup, process and results
·         Ease of use so it can be deployed on the shop floor by inspectors with no CAD training
·         Go/no-go displays that enable an automatic pass/fail check with pre-defined tolerances
Fulfilling the CAI Promise
CAI software will become a mainstream application and an essential part of the digital product development cycle. Pushing quality inspection into earlier phases of the development cycle will speed product development and ensure greater quality. As supplier networks continue to expand and products are increasingly differentiated according to quality, how well a company implements the inspection process can be a make or break factor in the marketplace.
CAI is beginning the same way as most new technologies. The innovators are relatively small companies without extensive marketing resources to penetrate deeper into large manufacturing operations. System integrators and consultants are needed to customize the new CAI technologies and integrate them into existing digital manufacturing processes.
CAI can eliminate the requirement for generating 2D drawings for parts and tools, which can save hundreds of engineering hours. It places the verification and inspection process into the 3D digital realm, where it can be fully integrated into existing CAD/CAM/CAE processes. This will allow manufacturers to reap greater benefits from their CAD/CAM/CAE investments and bring them closer to the promise Six Sigma.
The biggest obstacle to CAI acceptance is the inertia caused by familiar ways of doing things. Unwillingness to take a risk is always a deterrent to innovation. But, the difference between CAI and earlier digital processes is that there is much less risk. CAI technologies complement, rather than replace, the CAD/CAM/CAE systems manufacturers already have in place. Early adopters of CAI will get a head start in establishing processes whose benefits will only multiply with time.